The year is rapidly drawing to a close and the Zonta Club of Sydney held our last meeting for the year prior to our Christmas party on Wednesday 21st November.

As always, we had a full schedule of great speakers, guests and our usual fun and fellowship, as well as discussion of our advocacy and service projects.

Our first guest speaker was Laura Jamieson, who was awarded the Sydney Zonta Club Prize -Best Female MBA- of the year at UTS 2018. Laura spoke of her background in project management, working in life insurance and also volunteering as a project manager for several events including the arrivals/ float order and departures for the Sydney Gay & Lesbian Mardi Gras, along with The Sydney Gay Games, and the Qatar ‘Asian Games’. She also explained  how volunteering energises her, and other interests such as the Strathfield Symphony Orchestra and the Bookbinders Guild of NSW  keep her busy.

Since completing her MBA, Laura is considering a possible PhD, focusing on business ethics.  She thanked Zonta for the scholarship, stating that the award gave her confidence. Laura donated her prize money to the Asylum Seeker Centre.  Another wonderful example of the inspiring women the Zonta Club of Sydney have been able to support through our various awards programs.

Our second guest speaker, Dahlia Eissa, a lawyer (UQ) with a Masters from Harvard, gave a moving and disturbing account of watching a documentary about Female Genital Mutilation (FGM), which was filmed in her home country of Egypt, and how seeing those images changed her life. Determined to try to put a stop to the practice, Dahlia formed the Tem Foundation. Tem, in ancient Egyptian means “whole” and her goal is to educate people who practice FGM to understand that their “daughters are born whole, they are born perfect”, and the practice is unnecessary, and to eventually eradicate this practice. She is struggling against very strong and ingrained cultural traditions.

The TEM Foundation, re-trains the “cutters” whose livelihood has been dependent on FGM, to make jewellery. The profits from sales of the jewellery products are directed towards the raising and education of the girls who have not been “cut”. Trialling in one small village has been successful, and has been running for three years. As the usual age for FGM is 7 – 9 years, the goal is to get these girls to college age, when Dahlia thinks it would then be too late for the practice to be performed. 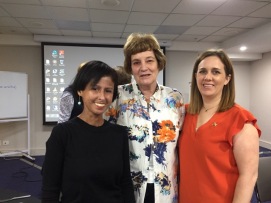 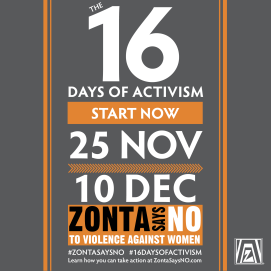 In addition to our speakers, club members also discussed the 16 days of Activism campaign which occurs globally and is to work towards ending gender based violence.  One of the major goals for Zonta International is to end child marriage, and during this campaign we will be working to raise awareness of this issue.

As always, if you would like to come along to any of our club meetings and be inspired by our speakers or learn more about our projects, please feel free to contact us at zontaclubsydney@gmail.com.  Meetings are held on the 3rd Wednesday of each month at Club York on York St Sydney.